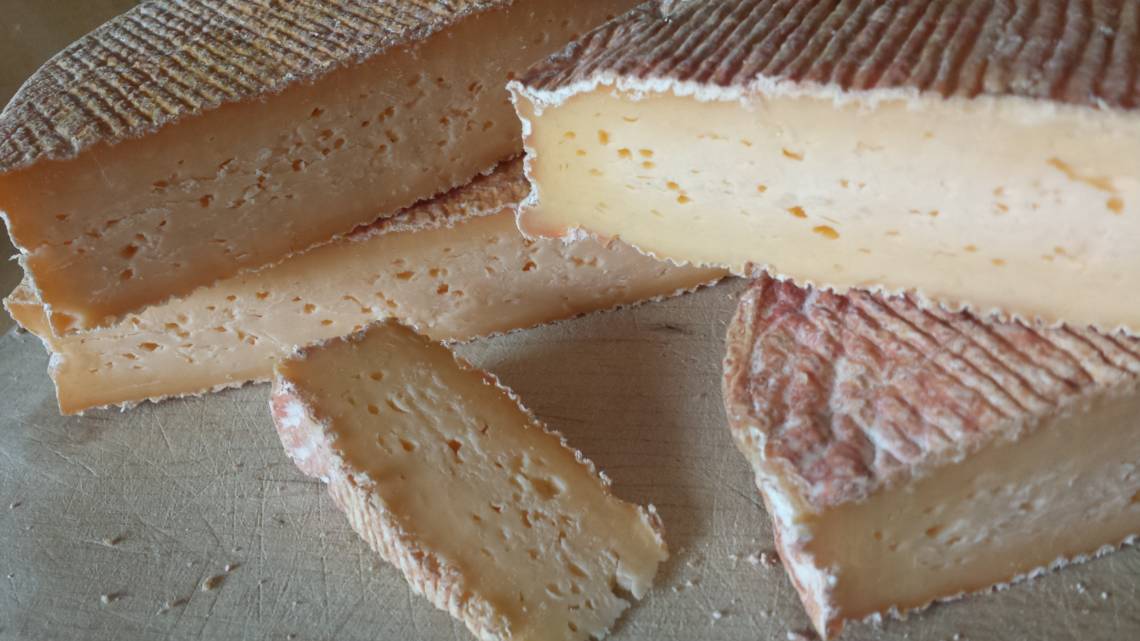 I made my first two wheels of muenster cheese last week. There are many recipes out there. I used the one in the Ricki Carrolls Cheesemaking book. This particular cheese, like brie and camembert, doesn’t require you to press the cheese curds, but to simply ladle them into a mould and let the whey express via gravity. It’s considered a mold-ripened cheese. Muenster is inoculated with Brevibacterium linens (red mold) and the development of this mold contributes to its unique flavor and it also makes it slightly stinky, but not like limburger.

Rather then using my regular 2 and 4 pound moulds, I needed a special mould. They have these cool wood moulds (small, medium and large) but they are very expensive… over $100 and it just wasn’t happening. So, I made some moulds out of food-grade polypropylene. Once I had the moulds, and the special bacteria, I was ready. There’s two ways you can use the red mould. 1. you can add it during the ripening stage with the starter culture. 2. you can mix with water and spray it on the cheese before it heads into aging. I opted for the first, adding during ripening.

For cheesemaking, I now use the Anova immersion circulator and I don’t know what I’d do without it. You can really control the temperature, including holding the same temperature for as long as you need, and also manage the ramping of temperatures needed in most cheesemaking. If you’re really a techie, here’s the Anova Culinary Sous Vide Precision Cooker w WI-FI and Bluetooth, the same unit, but has Wifi.

I made the cheese per the recipe I was using, and once done, ladled the curds from the pot with the whey in it to the moulds. You set up the “mould-sandwich” when you use these band-type moulds. That is, a cheese board on the bottom, then a cheese mat, then the mould, then another mat, and finally, another board. (See pics below). After you evenly distribute the curds into two moulds, you let it sit for 20 minutes or so. Then, you flip the mould, and let the cheese settle back down on the other mat. You do this flipping every 20 minutes so that the cheese doesn’t bind to the mat… and it develops the skin on the outside. Muenster is not as soft as brie or camembert but the process is just the same. You have to be careful not to tear the skin on the softer cheeses. This is easy to do if you don’t flip it often enough. The soft curd settles down into the mat and if left unchecked, the mold can rather quickly start binding the cheese to the mat.

After letting the cheese sit overnight in the moulds, I took out in the morning and put them both in the salt brine for 12 hours. After 12 hours, they come out and are patted dry with a paper towel. Then , they go into a 60F/85% RH environment. I put them in a covered pan, and into my meat curing chamber since it runs a little warmer than my cheese cave.

AllMorgan started as a family blog to keep extended family and friends around the world apprised on what's going on at our Indiana homestead. It always been a cross between a family diary and photo … END_OF_DOCUMENT_TOKEN_TO_BE_REPLACED