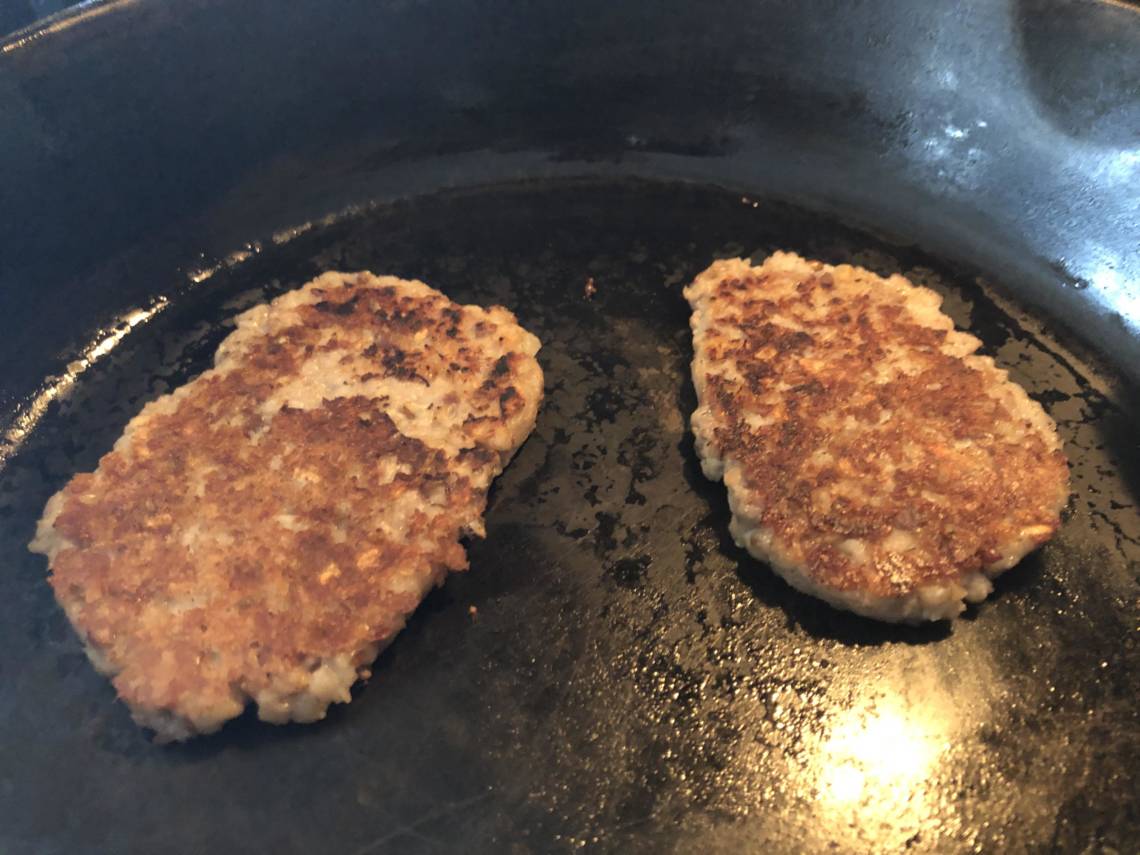 This has been an ongoing post over the last 4 years that I have been updating as I tweaked my process and ingredients to make goetta. Not just goetta, but goetta that meets two simple criteria. 1. It tastes like what I remember as a kid, and 2. It cooks up well in the skillet. When I say “cooks well,” I mean, it crisps up on the outside, and doesn’t stick to the skillet so much that it falls apart. This has been the challenge for me. If you’ve read through this post before, try it once more. I’ve taken out the extraneous info and anything leading up to my previous attempts that I deemed unsuccessful.

Yes, you can find the recipe and my detailed process below. I’m not stingy. In fact, it’s my hope you will try it, and report back on your results, and thoughts. The recipe is not where good goetta is at since it’s subjective and everyone has different tastes. It’s the process we employ to make goetta that determines its success or failure. Read on to learn more.

It took growing up to realize that growing up in Cincinnati was cool. As a boy, I didn’t know or appreciate its history or wonder. As an adult now interested in heritage and tradition, I’ve learned so much about the Midwest, my ancestors, and their lifestyles during a certain place and time. It’s still cool to live here… but only now, I live 30 minutes west of Cincinnati. There’s a saying around Cincinnati’s west side…. ‘West-siders always move west’, and that’s true.

In a quest to make the best homemade goetta, one can begin, and also end in Cincinnati. The original Porkopolis! While some argue, that “Porkopolis” was not a compliment to Cincinnati,  I say it’s all a matter of perspective. If you didn’t know, Cincinnati was the original hog butcher to the world until around 1860, after which Chicago exceeded Cincinnati in the number of hogs being killed each year. That along with the fact that the majority of Cincinnati’s population was of German descent looking to make sausage go a little further for their families, it’s safe to call goetta a rightful by-product of Porkopolis. “Like Pennsylvanian scrapple or North Carolinian livermush, goetta takes scraps of meat that would otherwise get thrown away—pork, sometimes beef, or offal—and combines them with grains. The resulting mixture is then spiced, smushed into a loaf, sliced, and pan-fried to crispiness.”

For better or for worse… we ate goetta… and a lot of it. Goetta is as familiar as a dollar bill to me and anyone in the surrounding areas… But, drive more than 100 miles in any direction out of Cincinnati, walk into the next Waffle House and order goetta, and they’ll look at you like you had two heads.

Respect to the spice mix, but the magic is in the process

You can find many goetta recipes around the internet, with many clever variations, but there’s not a lot of talk about the creation process. I have a goal to make the goetta I remember eating in the 70’s-80’s. It was mostly Glier’s… made just across the river in Covington, Kentucky. There were others too… but this is the one my parents bought, and so you might say I was indoctrinated. “Glier’s has the distinction of containing offal… pork hearts and pork skin, which appear as headcheese-like dark pink chunks in the otherwise pale gray raw patties and give Glier’s a noticeable funky smell before it’s fried. That funk, as pork enthusiasts are well aware, translates into wonderful depth of flavor.”

For this latest round, I didn’t have pork hearts, but I did have chicken hearts from my last harvest, so I used these this time. I also had some chicken livers. I hand-diced the livers in pea-sized pieces.

How it cooks, matters!

I cook my goetta in a cast iron skillet on medium heat and have a special splash screen I use to catch the many exploding oats. Goetta should cook up right, browning but not sticking or burning before it does. I shouldn’t have to oil or lube up the skillet either. Truly crispy on the outside, and soft on the inside. When the oats snap and pop while cooking, I think it’s close… because they were not overcooked during the initial cooking stage. These things matter when you are trying to recreate nostalgia. I’ve spoken to many people who have made goetta and the common suggestion is water reduction. After the goetta making process, the mixture is very thick, and bits do need to be scraped off the pan (or crockpot) periodically. The final mixture should be so thick that if you take a spoonful, and drop it back in the mixture, it sits on top, and doesn’t sink back in.

The recipe (and my process)

Prepare the meats. Here is where we’re bending the flavor-profile like a jedi. Typically, goetta calls for half pork and half beef. That’s fine, but I’m swimming in good quality pork, and so I used no beef, and all pork this time (with the addition of pork skin, chicken hearts, and livers.)

I typically grind all my meats for goetta, but you can buy and use ground.  For this recipe, it calls for a little over 2 lbs of meat. Here is what I ended up with this round.

For me, the skin is required. Not only because my childhood goetta calls for it, but the skin renders out an amount of collagen during cooking that breaks down with the fat to help congeal the final loaves and lets the goetta lube up the skillet more on its own. I always have an abundance of skin, and it keeps indefinitely vac’d in the freezer.

I grind the above through a course die. I don’t worry about keeping the meat and fat cold for grinding like we would for sausage.

Grind into a bowl, then add

.2 pound hand-diced chicken livers
(any liver you have will work)

It’s important here to not run the livers through the grinder. Hand dice, then mix into the farce. We want small chunks that don’t disappear into the goetta. Put in fridge until you need it.

Put a large pot on the stove and add

Bring to a boil, hold for a few minutes until the boullion is dissolved, then add:

You can skip the bulgar wheat and use 2 and 1/2 cups of pinhead oats. Reduce heat to low and put a lid on. Stir periodically until the oats have absorbed all the water. It will be thick and will stick to your pan on the bottom. Be scraping it up as you stir using a large metal spoon. This won’t take long (maybe 10 minutes tops). Many recipes in the past had us doing this for 1-2 hours! I feel like this is overcooking and a contributor to a starchy, sticky mess. It’s OK that the oats still have some stiffness before we add the meat. In another bowl, measure and combine:

Once the oats have absorbed the water,  it will be thick! Add 1 more cup of water to the meat farce along with all of the spices you measured and mix until integrated. Then, add all to the oats. Mix very well while still cooking on low.

Once everything is mixed, I transferred to a crockpot on high for 2 hours. This includes the time it takes for the crockpot to get up to heat.

You want to stir well at least every 30 minutes during this time. I still used my spoon to scrape the sides of the crockpot as the thick mixture will be evaporating more water out while it cooks. This is good.

Again, you know it’s done when you take a spoonful of the mush and drop it on top, and it doesn’t quickly integrate back in. Cut the heat and prepare your loave pans. I have used these stoneware mini bread pans that my wife has. They are perfect size and shape to make 6 loaves. I lined them with plastic wrap, and spooned the goetta filling into each, packing a little with the spoon to get the air out. I wrapped the plastic wrap over the top and put in the freezer to set.

In most of my past attempts, here is where things fall apart. I’m always excited to slice and cook up the first piece of goetta. I slice and toss in my iron skillet. It looks right. It seems to lube up the skillet the way it should. It smells awesome, both out of the freezer… and while it cooks. I wait a bit anxious to flip it and see how it comes off the skillet hoping the brown crispy side stays intact.

See a past attempt below that falls apart. This is the challenge with goetta and is the sum of all the handling of the oats, and the process employed.

I have added a pic below that is the most recent attempt. A huge success in my mind! It smells great, flips and holds together as it should, and has that crispiness outside that makes goetta what I want it to be.

During my quest for the perfect goetta, I spoke to a lot of people both on and offline. I want to thank my friend Chris N. for sharing his tips and a recent batch of goetta he made and also Johnny over at the Bakers Biscuit (recipe), who could totally relate to the goetta dilemma. Both of these guys had the advice of using less water… even only enough to swell the oats just so much before integrating with the rest of the ingredients.

I have also heard of people letting the oats soak overnight reducing the cook time on make day). I think there is merit to this.

If you have any thoughts or comments about goetta, your experience, or just a story, I’d love to hear from you. It’s my feeling that you need to be able to give a loaf of goetta to a friend and have them be able to cook it up and hold together without them having to be careful with it… or handle it a certain way. I’m sticking with this current process and recipe for now and think it has come a long way. Good luck in your own goetta endeavors.

AllMorgan started as a family blog to keep extended family and friends around the world apprised on what's going on at our Indiana homestead. It always been a cross between a family diary and photo … END_OF_DOCUMENT_TOKEN_TO_BE_REPLACED